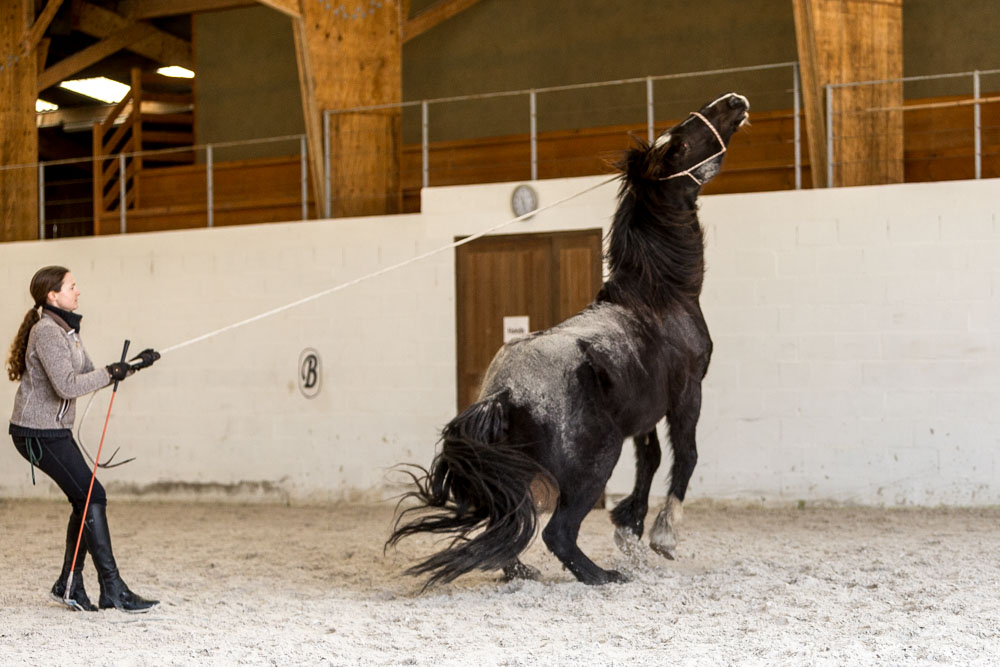 Obelix Owners came to, being pretty desperate about their horse. The same day, Obelix had to see the vet, and it was impossible to touch him for examination or treatment. On top, the horse was pulling the two daughters between the age of 10 and 13 around, and it started to become more and more difficult to prepare him for riding.

Grooming, placing the saddle and the bridle had become a big drama each time. It was the vet that recommended Haras du Plessis.

Obelix arrived on the 1st March afternoon. He is all black, mix of Irish Cob and Swedish Saddle Horse, 8 years old and previously owned by a Circus. Coming out of the trailer, Obelix was very emotional but pretty unconcerned about his environment. He immediately showed us his savvy in pulling his owner around.

He is not pulling loose, but still, it is very unpleasant. We put him in his box with paddock next to Tadjik and decided to let him settle down overnight before having the first session.

The next morning I entered his box with an open mind, without assumptions about his character and core problem. It is too easy to simply assume that a horse like this is acting out of dominance and disrespect.

Obelix reacted very sceptical on the horseman's handshake, didn’t accept touch behind the line of the eye. He seemed very unconfident to people, being touched and being caught. So I spent some time there before I took him in the arena. I asked Mathilde, a working student at Plessis, to take a bucket with brushes with her.

I walked around with him and again I was surprised how light and sensitive he felt to me. Not like a dominant, rude horse. I quickly noticed as well, that he seemed to already have learnt some horsemanship on the ground. He knew the friendly game with stick and string, he knew the driving game backwards and the hindquarter disengagement.

Of course, he tried to pull away here and there, but it is more like just leaving, not storming off. After checking these few things, I went to grooming him in the arena. It was quite a deal for him to accept and be confident with me touching him all over with a brush.

My bare hands were no issue after just 5 min but the brushes were a bit more challenging. In a way, he is an easy “difficult” horse, because he responds perfectly after using a strategy 2 or 3 times. Things work the way it is prescribed in the manual! The first session ended that he accepted being brushed, accepted being rubbed all over with a saddle pad and approached and touched by a second person.

Noticing his confidence problem, I asked all our 5 Working Students to go and visit Obelix once a day in his paddock, say hello, put the halter and just rub him nicely all over. This helped him a lot as well.

The following 3 sessions I worked on standing still in the grooming corner without being tied. He tried to walk away the first time a few times, but all it took to get him back was a little tap on the HQ to disengage him and put him back on his spot. The second time (third session) he was already standing still with the rope on the ground like a pro.

I could saddle him up without any issue and decided to see what the problem was with the bridle. Of course, his first reaction when seeing it was defensive, so I decided to install a positive association by giving a piece of carrot with it. He had to reach for the piece of carrot which was in the same hand as the bit and after just 3 times he already tried to take the bit as well and was no longer throwing the head in the air.

Parallel I practised proper leading, stopping and coming with me and synchronizing. He got it immediately, obviously having fun doing stick to me. I only had to explain to him 2 times to not cross in front of me and to not overtake me.

He as well learnt to go forward on a circle, disengage with a light fell on the head and a look on his HQ and then go in the new direction with an understanding and without discussion.

Most valuable exercises for Obelix: 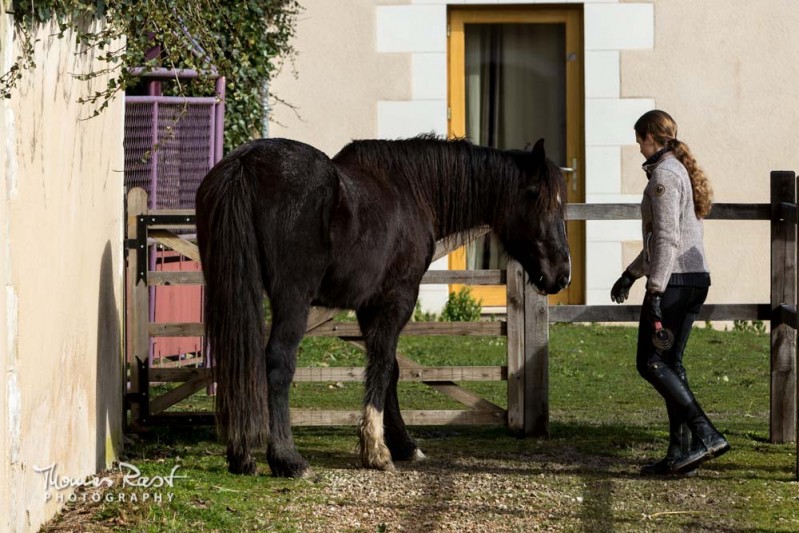 Our first hello - he was very reserved and sceptic.

Obelix had found out that by leaving and following his flight instinct he could make things that made him feel afraid or unsure, go away. My objectif for him was to first show him that he could trust and second install a better response which is confrontation or asking a question when being unsure.

He also rolled a lot during the first session. This can be a sign of a very emotional horse, trying to get rid of Adrenalin. I have seen this already a few times with rather high spirited horses.

Read his facial expression. Tight chin, eyes wide open, ears up and back - he is sceptical, usure and ready to take action.

Here I wanted to show him the saddle pad and his first response was - I am out of here! Not a very useful solution in daily life!

Yes! He came back and decided to check it out. First step towards installing a new response.

Now I asked Mathilde to approach Obelix and just rub him in a friendly way. His frist reaction is very clearly on the fearful/defensive side.

Oh, it`s not so bad after all! As the vet couldn't even touch him, I decided to do a lot of human friendly games like this. It made a big difference in his level of trust towards people.

Head - cuddles put the horse in a very claustrophobic situation and if done well will help the horse to relax in confined situations like being checked by a vet.

The more he understood and started to trust, the more he was relaxing and releasing tension.

Standing still without being tied for saddling up. Remember, this has been one of the really hard tasks for the owner.

He decided to leave once again....

Now he learnt that whenever he put tension on the halter, I would disengage his hindquater with a light tap to have him face me again.

But please also don't run in front of me! You can see that I am simply blocking the nose with stick and the correct lenght of rope.

Obelix got the little stick to me game really quickly and started to quite enjoy it!

Of course there was a bit of commotion and some tries of his to just leave instead of giving it a try. But he ended up trotting in the trailer and really understanding it.

Here I asked Steffi, a working student, to simulate the person who usually stays outside the trailer to close the bar, to rub him and his HQ.

Lots of relaxing and yawning was going on especially with the trailer loading.

His owner managed to come by and watch and also learn with Obelix a few times during the 8 days.

They found a new favorite game together!

Bridling with savvy. This was also one of the nightmares for Obelix and his owner.

Now Obelix loves to take his bridle and his owner learnt how to cause the horse to want to take it rather than creating opposition reflex.

The owner came 3 times to watch and have lessons himself, which was very important to me. In the end, it is mostly the person on the end of the rope or on top of the horse, who creates unwanted behaviours.

How to create positive behaviour instead of defensive reactions was a big topic. I explained a lot of Prey and Predator thinking and triggers and showed him how a friendly and peaceful attitude paired with clear rules can make a whole big difference for Obelix.

The last little highlight for the owners was when loading Obelix for going back home. Obelix had made a big drama when coming here, kicking and revolting in the trailer during the drive. I had practised the trailer for the last 3 days of his stay.

After just 3 approaches to the trailer and letting him go in, turn around and come back out, Obelix was trotting into the trailer! He had understood what we wanted of him and through allowing him to come back out, he no longer felt trapped and was able to stand still.

We could close the door without a problem and without Obelix feeling trapped. He was aware of the situation through progressive and friendly explanation.

Obelix was an interesting horse and situation for me. How to help a horse and its owner who have no experience with Natural Horsemanship and are pretty much beginners with horses? What to teach the horse and how to explain to the owner so they can continue their relationship at home in a good way?

It really helped me to stick to the essentials of the horse-human partnership, which were in this case safety, the friendly game and how to overcome the prey-predator dilemma.