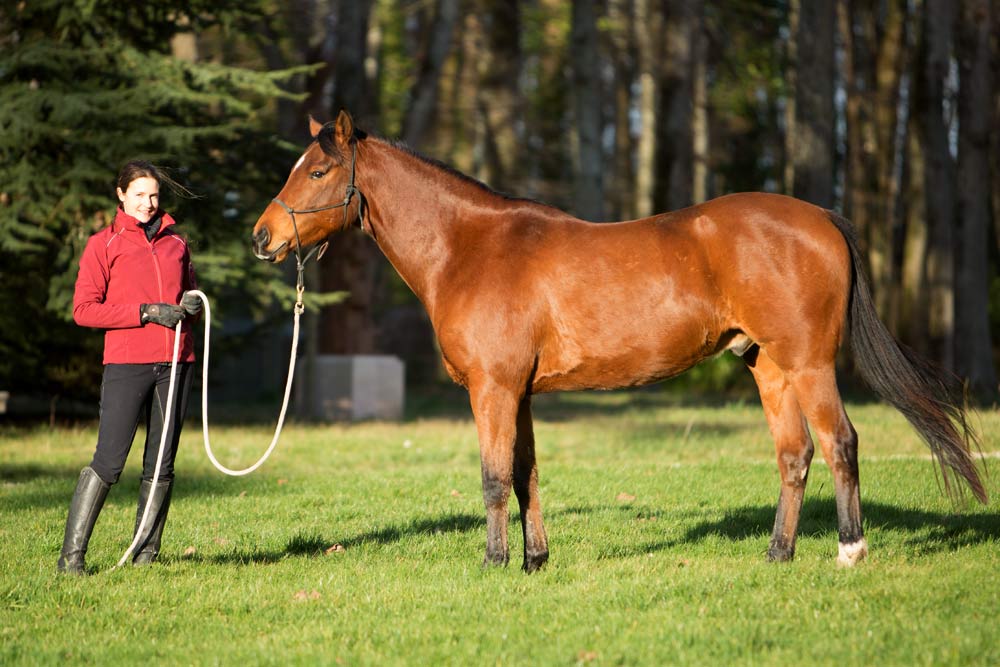 Zayin is a 6-year-old Anglo Arabian gelding. He was started when he was 3 years old, but due to some physical issues and lack of time, he was never ridden much. Additionally to that, he is a very hot and sensitive, at times very emotional horse. He is known to be rather sensitive to the cinch and the rider's leg, with a tendency to kick and buck.

His physical issues are:

The goals for him would be:

What I found out – or felt about him – during the first week:

Zayin gave me the feeling of being really lost, insecure and not knowing at all how to deal with the sudden change of environment, people and horses. He felt out of his mind, like a child that got overwhelmed by impressions and doesn’t know how to deal with it.

While Tadjik was mainly afraid when he had to leave Zayin, Zayin was afraid of the whole situation. His emotions are like a spiral, once he gets started, he gets worse and worse – he can’t control himself anymore.

So during the first few days, I spent a lot of time with him installing a daily routine. Grooming while standing still, picking feet, going into the outdoor arena, allowing him to look at everything. I was pretty passive, allowing him to express himself without ever giving him the feeling that he was acting “wrong” or “foolish” – always open to him and waiting for him to connect to me.

Which started to happen pretty fast and the intervals where he would lose connection and get lost in his emotions became shorter and shorter. Soon he started to look for me and come whenever he felt worried. That for me is a first big step in the good direction. I wish that all horses see me as their safety spot, never as the criticiser or the one giving blame for “not behaving right”. Of course within some safety rules for both of us.